Obviously he was a noted automotive writer.  As discussed previously, he inaugurated the idea of testing for cars. He sold the idea to Mechanix Illustrated, which was a Fawcett Publications periodical, from the 1940’s to the early 1970’s. Interesting to notice that the Magazine refused to acknowledge his death and kept his column as Tom McCahill Reports that was ghostwritten by his stepson Brooks Brender. We will use a lot of the material he left at Mechanix Illustrated.

Besides Mechanix Illustrated, Tom McCahill also wrote for True, also known as “True, The Man’s Magazine”, was published from 1937 to 1974 by Fawcett Publications. During the 1950s, famous automotive author Ken Purdy was its editor.) 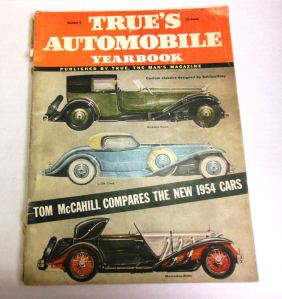 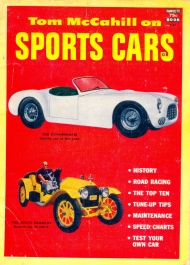 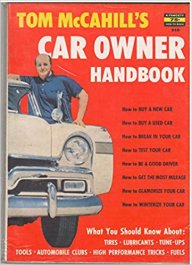 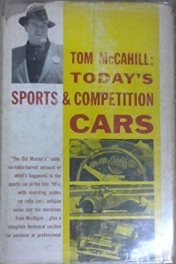 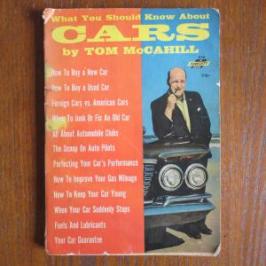 I have fortunately managed to get all these books an I had a lot of fun reading them. It is not practical, and not necessary to transfer all the contents of his books to the Internet, not to mention that this might incur breaking some copy rights. To prevent this I will limit the use, although more than 60 years already passed, and there should be no contention about. Probably, sometime in the future, somebody will think of publishing all of them as it has been done with Mechanix Illustrated old issues. I should mention that this whole exercise is void of money oriented aims, my idea is to honor Uncle Tom McCahill, give him the credit he deserves for inventing the car reviewing business, save it for posterity and, maybe above all, have fun!

A word on his “complete works”

It can fairly be split in three groups: Books,  Handbooks and Car Testing, mostly at Mechanix Illustrated.

Books, as such, he only wrote two, both in 1954, i.e., The Modern Sports Car  and Today’s Sports and Competition Cars,  both from Prentice Hall, Englewood Cliffs, NJ. The first is dedicated to Joe, his Labrador retriever, who died (he says killed) in an accident and the other book he dedicates to the IRS. Both are concerned with  sports car, be it for competition or simply fun. These books are different enough to insure the image Uncle Tom have of complete honesty to the reading public, and not a lesser act because he was held down by the IRS. But they somehow are redundant to this first handbook, Tom McCahill on Sports Car, Fawcett Publications, Inc Greenwichs, Connecticut, 1951. Since I will cover this handbook extensively more than any other publication, I will extract from the two books the following chapters, and the dedicatory, which will top my review on his first publication:

From The Modern Sports Car: Dedication and It All Boils Down to this.

From Today’s Sports and Competition Cars: Dedication and What It’s All About.

To JOE, my Labrador retriever, who was killed in an acci-
dent.
For almost six years he was my constant companion on
every automobile test I made. He sat by my desk as this book
was written, always hoping I would stop and take him hunt-
ing. Joe was the official mascot of the American Sports Car
Team in Europe in 1952 and 1953, and was also a duly elected
member of the Yale University Sports Car Club.
Joe was one of the greatest gun dogs of all time, and in six
hunting seasons, in all parts of the world, he never missed a
single retrieve.
He was a real sports car fan and loved high speed driving.
Anyone who came to my house in a sports car was always wel-
come, especially if it had a deep exhaust roar. Extra nice
Detroit owners were tolerated.
He was a great guy.

To the Internal Revenue Service.
Without their constant prodding
and urging, this book would
never have been written. If
enough copies are sold, perhaps
they’ll leave me a crumb or two

It All Boils Down to this

Let’s Start with Sports Cars, the first on the left above. Better yet, let’s not forget the staff behind, probably already gone, by with my thanks and to the best of my knowledge, without breaking any copyrights, since I will limit the use and more than 60 years already passed. Perhaps, sometime in the future, when the subject is exhausted I will think of publishing it as it has been done with Mechanix Illustrated old issues.

Since nostalgia is a high point in this site, let’s get started with two propaganda adds:

Let’s take a look in the contents separately:

What is a sports car?

You can navigate in the world of Uncle Tom McCahill either from above or directly at Home , where you will have stacked all blogs so far.

At Index you can select what subject you want

Or you can search directly bellow: